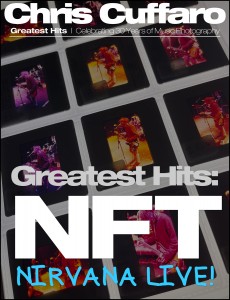 The energy, the music and the band was fucking brilliant.  This was my 2nd time seeing Nirvana live and my first time shooting them live.  A great night and show.  A week later they played the infamous concert on Halloween at the Paramount Theatre in Seattle.  AND I was lucky to be there for that show as well.  Ahhh… the good old days!

These images are the best of the best.  I shot them while on the side of the stage.  There was no real room in the pit and it was a bit dangerous.  SPIN Magazine ended up using one for an article called New Music Preview.  Some of these images have not seen the light of day.  I chose the best of the best.  I wanted to make sure that you could feel what I felt that night… pure Nirvana energy!